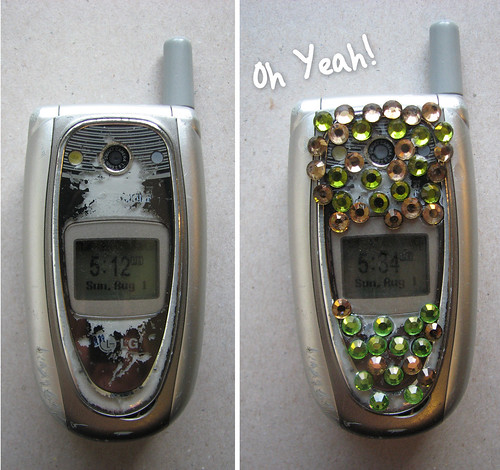 No bling without irony.

Let me just start by saying I defy you to find anyone under the age of 60 who has used the same cell phone, straight, for 6 years. Well, in one month this beauty will be 6 years old, and not because I just love it so much. I have on so many occasions gone into my carrier’s company, hoping to replace this horrid monster, only to leave sadder, and with the same phone I came. 1. I have to high of standards, apparently, and they just don’t carry phones like the ones I want at my carrier. 2. I keep trying to hold out until I have my credit card paid off, and a new cell phone will be a reward.

This phone truly takes a licking and keeps ticking. So, in celebration and anticipation of my phone’s 6th birthday coming up, I decided to obnoxiously and sarcastically bling out my phone. In general, I’m not fond of sparkly-glittery anything, and I have no prior experience in working these little gems. I bought a pack of these gem things at Michaels, only to get home and find out they don’t come with adhesive already adhered. What did that mean? I had to make do with some super-glue. Oh yeah. You can tell how well that worked out.

Twenty two minutes later I have the most awesome phone ever. Now I can continue to carry it with pride for another six years.

I kid, if you couldn’t read the sarcasm.

No. 26 on the list: Nikki, Tom, Matt and I went to Lothson’s chicken. It’s a hole in the wall type place that apparently has been there since the 40s? The type of place that serves the most delicious fried chicken, in paper bags, that then become translucent from all the grease.  My family used to go pick up fried chicken from there when I was a little kid and I had no idea they were still open until recently. We ate dinner together, the four of us, while watching True Blood.

No. 3 on the list: This past weekend my sister-in-law and I went garage sale-ing and at the end, we hit up an estate sale. There, thanks to Dacia’s keen eye, I was able to score my first world globe. I was so happy. It’s really nice, and the whole time we were there, people kept commenting on how nice it was, wishing they had seen it first.