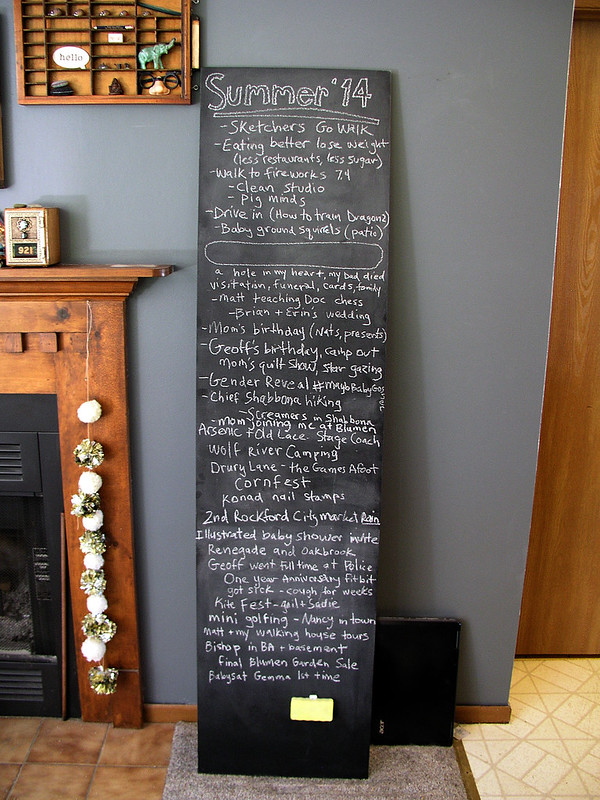 It’s September 22nd, my birthday and (what I deem as) the first official day of fall! So, what does that mean? It means it’s time to document my seasonal chalkboard, erase it and then start fresh. As you might be able to tell at the length in which the board is covered, this summer was BUSY. It was also a very hard one with the loss of my father, and probably why I really don’t want to rehash the season’s individual events, good or bad, right now. As much as I am not looking forward to another cold, dark winter, I’m finally ready to move on from this summer. Fall has been traditionally my favorite season, so let’s hope it stretches out for eternity.

Speaking of lists, I’ve been really wanting to crack down on crossing off every last item from my yearly lists that I made in 2009 and 2010 and actually create a brand new list for 2015. Keep tuned as I might share a few adventures. 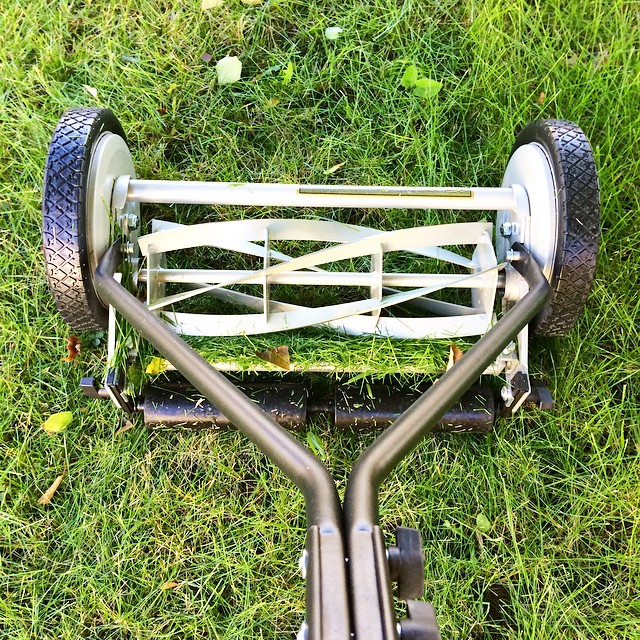 My sister surprised me with reel mower. I had always wanted zero turn mowers but I was super happy with the reel mower since I loved moving and I wanted something like this since I was probably 16 years old. Maybe even younger. My dad had an antique one in our shed, and every once in a while I’d try to take it out to mow and it was SO HEAVY and RUSTED I could barely mow a few feet. Then when I was probably 15 or 16 I went to stay with my grandma and she had just purchased a new rotary mower and had me mow her small lawn and it was such a breeze. I’ve wanted one ever since. I was a little worried that my dream might be just a fantasy after reading some of the negative feedback on reel mowers on Amazon. “Too hard”, “A good workout” and, “you’re gonna get ripped!” But after the easy assembly and taking it out for it’s first run I realized it was just as easy as any of the self propelled mowers I’ve used. I think that might be because I’m a little impatient, so even though the mowers were self propelled, I still push them to make them go even faster. So, pushing this little beauty was easy peasy.

One last note: Not only is it my birthday, but I recently found out it is Tatiana Maslany‘s birthday as well, ahem, only a few years later, cough. Who else is addicted to Orphan Black? I totally like to think of myself as a Sarah, and after dinner last week I realized my best friend looked like Cosima, with the same hair and glasses, holy cow. She was very much pleased when I told her that. If I can’t be Sarah, then I’d definitely want to be Felix, he is too beautiful, fabulous, sexy and sassy.