For my birthday my brother and sister bought me a SX-70 Land Camera. I have a fairly large polaroid camera collection including a one-step SX70, but not the SX70 Land Camera so it was a great addition to my collection. I was really excited to try it out and buy my very first Impossible Film. One thing I learned from Tiffany during her Polaroid Image Transfer class was that when the Impossible Project purchased the last remaining Polaroid Factory to try and save instant film, they only got the building and machinery, but not the chemistry, materials and instructions. Impossible Project had to start from the ground up, with the help of a few previous Polaroid employees, they had to redevelop an instant film of their very own. So Instant film is NOT Polaroid film at all. They’ve had to go through the exact same learning curves that Polaroid had when they first started out, such as light and temperature exposures, etc. How cool is that?

I got my first pack of Impossible film a couple weeks back but have been a bit afraid to take the leap. When you purchase the film they send you many instructions (via email, with your receipt and inside the film box) that there are extra steps compared to your standard old-school polaroid films. Number one being that you need to shield the film as it comes out immediately. They actually sell shields and bags to protect your image from light. I figured I could just rig something up myself and I thought I was pretty clever while patting myself on the back about it. I read reviews where people complained about wasting so many pictures before figuring it all out. I thought “I’m not going to waste ANY pictures.” Haha, yeah right.

Here are my first 3 pictures (L-R in order of taking them). The #1 picture I took was of Bishop (if you look you can see him in there) and it got jammed because of my handmade cover prevented the picture from coming out. I think it was folded in 3 with just a little tab sticking out. I couldn’t get it out and the only way it came out was by taking another picture, wasting #2. #2 even had some chemistry on it that had shot out of the first picture when it jammed. So, I goofed up. I realized I need to not use my homemade cover and just shield the picture the best I can while it comes out. So I tried again. I’m not sure if this is how all of these cameras work, or if it’s just mine (or maybe the film), but apparently when I take a picture it sits for a few seconds and then the picture starts coming out. I wasn’t sure if that meant it was exposing the picture immediately and then delaying the spit out, or if I press the button and then the camera lens is open for seconds at a time? For #3 I took the picture and because I was in such a hurry to protect the image I immediately spun into action, and apparently the camera wasn’t done taking the picture because I got that fun little dotted light blur. Fun, yes, but not what I was aiming for. 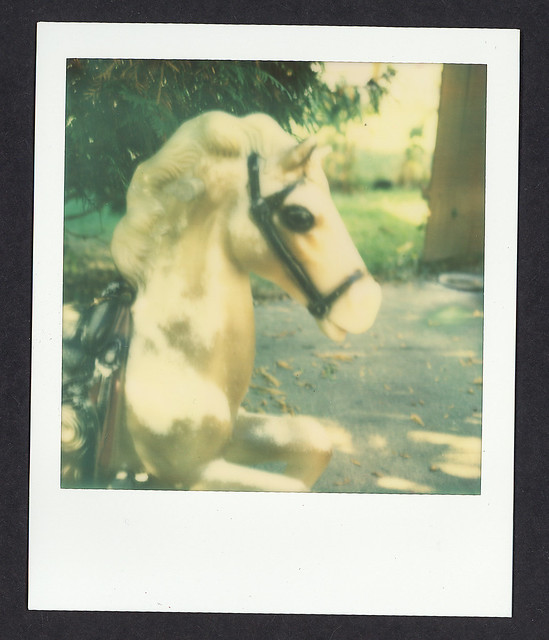 Finally this morning I decided to take a picture with the camera outside in good light. I got the focus just right, took the picture, shielded it and ran inside to develop it in the dark for 40 minutes. The instructions say the most important shield time is for the first 2 seconds, but that it continues to develop for 45 minutes or so, so I kept it in the dark the entire time and this is what I got. I had the focus on the horse’s face really crisp, so I’m not sure if that it is result of my camera’s focus being off, me still rushing it a bit when taking the picture, or the exposure time being long and thus my hand being unsteady for the duration of exposure.

Lesson learned. Everywhere I read, they said Impossible film is a finicky product and takes some time to master and as usual I laughed and blew off warnings, thinking I would be able to handle it. I’m now on picture #5 and I am having fun playing with it. Hopefully by the end of this pack I will have at least a couple pictures that I really like.

Impossible Project has film for several different Polaroid cameras, including 600, which is the pretty standard size camera people had before Polaroid shut down.

One last thing about Impossible film… as long as people keep purchasing, using and supporting their products they will continue to experiment and develop instant film. I had fun supporting Impossible finally and look forward to doing it again in the future.