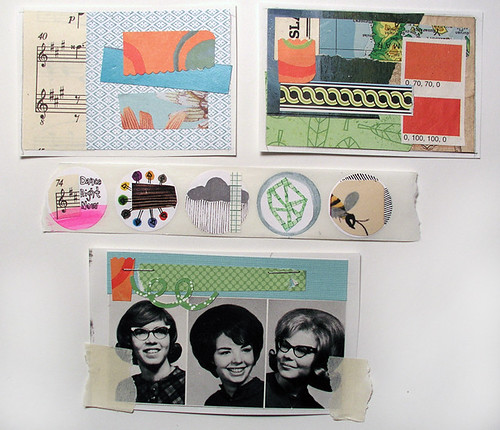 Gah! I wasn’t able to put up my sticker graffiti for Found Art Tuesday. I guess I should have known better with the weather the way it is in Northern Illinois. The weather was great on Saturday, but did I go out? No. Instead I woke up Sunday, all ready for adventures of putting up my stickers in public places, and instead it was pouring rain all day long. Today… snow :(

At any rate, I promised to share my sticker graffiti and this picture will have to do. I will post pictures later, when I adhere them to their new homes. Before I do that though, I think I’ll be giving them some coats of a sealant. Hopefully they won’t deteriorate so quickly while being subject to the elements of previously mentioned Northern Illinois winters. Also, I made some little circle stickers (middle row) and those were so tiny, fun and quick to create. The larger ones (probably about business card size) will be run through my xyron to give it a sticky back, although I’ve seen plenty of recipes online to make sticker paste specifically for sticker graffiti. Just google “Wheatpasting”.

I’ve been really inspired while approaching this project. There are TONS of flickr groups devoted to sticker graffiti.
There’s even one devoted to “Hello my name is” labels turned into graffiti stickers.

One thought on “Day 22 – Sticker Graffiti”