This is my third entry into the Thing-A-Day blog, cross posted here.

I’ve been working on this way longer than I should have, and the result is not quite the image I had envisioned, but I am still pretty proud of myself.

I have been spinning some very fine/thin wool to make a sock yarn which I will knit up to make a pair of socks. I thought it would be pretty cool to make an animated gif of myself spinning yarn. I borrowed Matt’s camera which has a program on it that allows you to set increments of pictures taken for a given duration. I started with a picture every second but that was way too much, so I set it for every 5 seconds. I spun for over 300 pictures and then using photoshop and imageready I put the images together for the result below. I ended up only using the first 75 pictures because it was taking so long and our “TAD”s shouldn’t become a chore. I also made it only 100 pixels wide, but I wish it had been a bit larger. 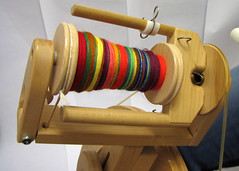 I have only made a couple basic animated banner ad gifs in the past. I don’t know a ton and have taught myself how to do this, so, no help from the computer geek boyfriend :)

Oh, this also counts for one of my animated gifs for my 2010 to-do list.