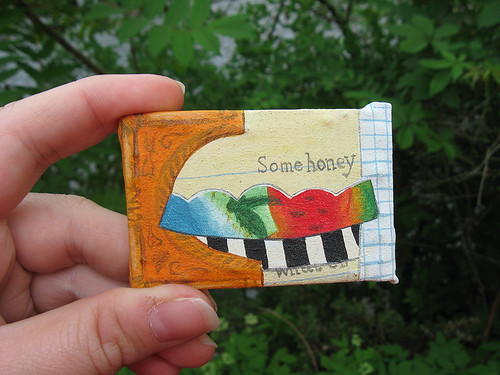 Doh, I thought I was going to actually post a Found Art Tuesday piece on Tuesday. The holiday on Monday threw me off, so here it is on Wednesday :) It’s been ages since I’ve participated in Found Art Tuesday.

I made another miniature painting, based on a collage, on a handbuilt canvas. I made this piece specifically to use in participating in Found Art Tuesday. This weekend my sister, Matt and I went geocaching, 7 in one day. It was all great until there was a tick found on one of the microcahes :( For those who don’t know, I am absolutely terrified of ticks (I have an irrational fear of getting lymes disease), so it kind of killed a bit of the joy. I had this painting I wanted to leave behind for someone, but just about every cache was a microcache (meaning, a film roll can, a magnetic key box, or pill box). 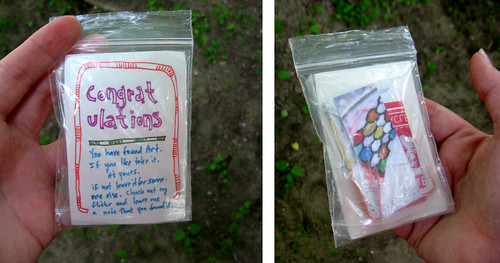 Since we were in the Aurora area, out by my sister, we got the idea of going to the Naperville Riverwalk. It was hard to be stealthy because the place was packed. The walk next to the river, as well as the regular paths were a steady stream of families, couples and friends all out enjoying the lovely weather on the holiday weekend. Finally I found a group of trees that was situated between the two paths, waited for a gap of people and ran up to place it facing oncoming traffic. 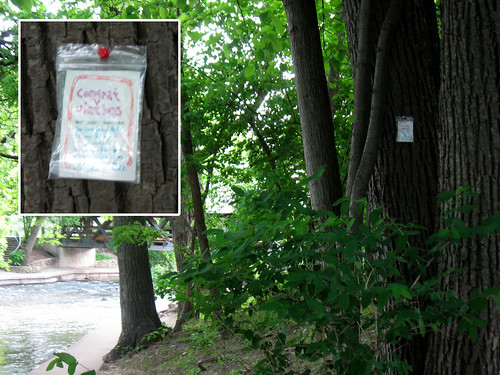 I realized that this is actually my fourth mini painting that I’ve left for Found Art and right now I’m batting 1 for 4. The first painting was my very first Found Art piece which I let go of on a group of balloons, never heard back, the second was in a lockbox geocache on campus, no one mentioned taking the painting from the cache log online, and then a month later the river flooded and the box disappeared :( Then the third was last year, when I left a painting on a geographical marker in Door County. I received the nicest email ever, from the man who found that painting. I couldn’t have hoped for a better person, he was an artist as well, and said that it gave him more hope for people, to find my piece. Now I’ve left this piece, in a high traffic location, so fingers crossed that it made it’s way to just the right person who needs it :)

Please check out my flickr set of all the other Found Art Tuesday pieces I’ve done, and here is the flickr group pool for other people’s Found Art as well :)

One last thing, I’m participating in the May Giveaway Day, where I am giving away not one, but TWO of my Recycled Envelope and Stationery Sets. Leave a comment on this post from yesterday and be entered to win, and then please feel free to browse around the rest of my blog, I like to meet new people :)